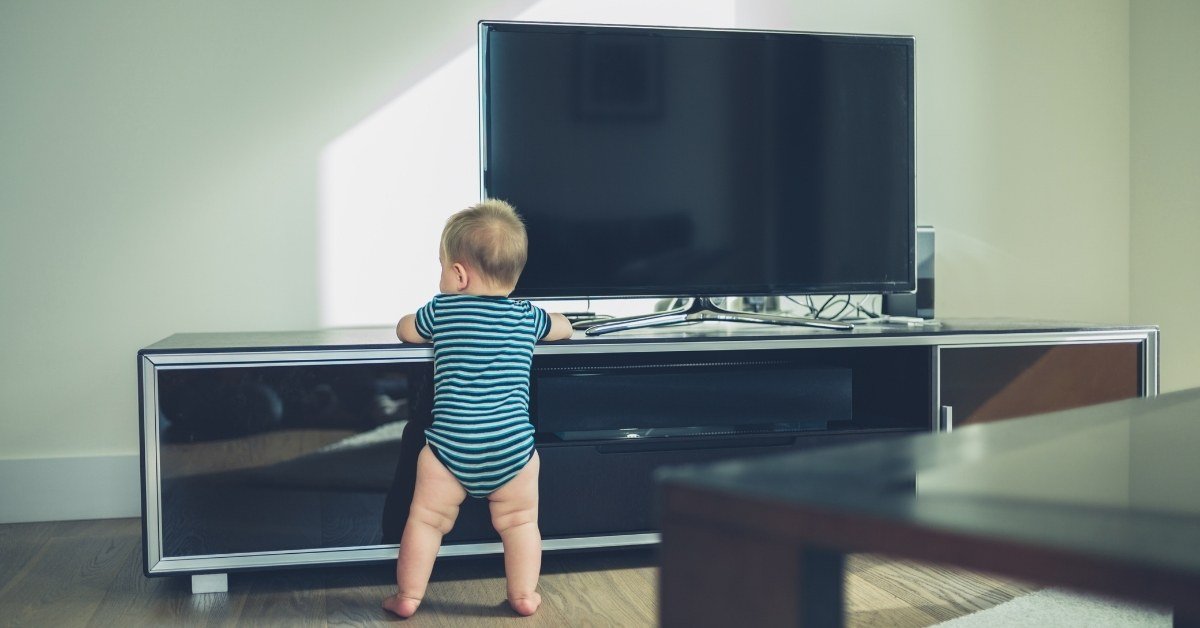 As your baby grows, it can be worrying watching them toddle about pulling out drawers and tugging on wires.

It’s potentially dangerous as it could mean your baby might pull something down on their own heads or might get an electric shock from appliances.

One baby dies every two weeks purely based on furniture-related accidents due to bad baby proofing, and TV accidents make up 70% of these. Your baby mustn’t become part of this statistic.

As your baby starts to move on their own, it’s important to baby proof the room to ensure they can’t hurt themselves when they’re exploring.

Your TV stand is one of the main danger zones. There are wires and places where your baby’s fingers can get caught.

The good news is you can baby-proof your TV stand in several different ways.

The Risk Areas When Baby Proofing A TV Stand

The main feature of your TV stand is obviously your TV. TV sets are getting larger and larger, meaning your baby is at more and more risk. If it falls on them, it could cause some severe damage.

The best way to remove the risk is to wall mount your TV. This means it’s entirely out of your baby’s reach, and they’re not at risk of pulling it on top of them.

If you don’t have access to a wall mount or don’t have space, purchase a strap to attach your TV to the stand at the back or to the wall behind the TV.

You should be able to wrap the strap around the bottom of the TV stand.

It’ll stop the TV from falling forward, and if it does get knocked over somehow, at least you’ll be confident that it’ll hit the wall behind rather than falling onto your child.

You can’t hide your consoles away in drawers because they won’t work when you need them to. The next best thing would be to put them inside a glass-fronted cupboard if your TV stand has one.

That way, you can still use remote control pads to use your consoles, but there’s no danger of tiny fingers getting stuck in the disc drives.

You’ll need to ensure that there are child safety locks placed on the cupboard door if you’re using that option.

If your TV stand doesn’t have a glass-fronted cupboard, you’ll still need to leave your consoles somewhere usable.

You’ll also want to purchase plexiglass strips to stick over the fronts of your consoles. They’re just like a screen protector on your phone.

They allow the connection to go through so you can still play games, but they stop your toddler from pressing buttons and sticking their fingers into disc drives.

Make sure all cables are secured in cable tidies and stored down the back of your TV stand.

Never let any wire dangle down at the front where your baby might be able to tug at it, and ensure you always unplug and tidy away your wired controllers for your game consoles after use.

Toddlers are still unsteady on their feet, and they can easily trip over.

As your baby becomes more mobile, those sharp corners pose a massive threat. They’re easy to fall into, and your baby can bump their head. Any sharp corners need to be padded.

(This is relevant to all corners in your rooms, not specifically your TV stand; however, your TV stand, in particular, is likely to be at head height for your baby).

Pad over your corners using bubble wrap or a similar soft covering.

It’s easy to stick your bubble wrap down with normal tape, but it’s best to check that the tape won’t damage the finish on your TV stand first. Masking tape is a great option.

Remotes don’t just pose a tripping hazard to your child, but it’s also possible that they’ll try to put the remote in their mouth, potentially causing them to choke.

Given that babies see everything as a toy, there’s also a potential that remotes could be used to hit items of your furniture and cause damages within your home.

Ensure you always place remotes out of your child’s reach and put them away in drawers when they’re not being used.

Behind your TV, you’ll undoubtedly have lots of outlets where you plug in your TV and consoles. If you have outlets still free, make sure you plug them up with baby proofing plugs.

These are flat plugs that fit into your outlets that don’t connect to anything. They’re also incredibly difficult to pull out. This stops any tiny fingers from working their way in.

So, you think you’ve cleared as much away as you can from around the TV, but the problem is, your baby is instantly drawn to the same place all the time.

This is because your baby is naturally curious, and when your TV is on, they see the changing colors and noises as stimulation, and are automatically drawn to it.

When your TV is off, they will still be attracted to that area of your room because they’re looking for ways to make the color come back.

When the TV is on, the fascination of the bright colors will draw them closer and closer to the TV screen.

First, Is Your Toddler Too Close To The TV?

While you might panic that your baby is too close to the TV, this isn’t generally a problem. It’s just a sensory learning tool for them.

Scientists 20 years ago stated that sitting too close to the TV could damage your eyes. However, with the increase in screens on computers and phones that we look at constantly, this isn’t necessarily true.

If you’re worried that they’re obsessed with watching the TV from a foot away, check out the rest of their behaviors.

Are they bumping into things, struggling to pick items up, or showing other signs of being clumsy?

If so, you might want to take them for a checkup.

Babies are attracted to things that they can pick up, investigate, and play with. You should clear off your TV stand completely so that it’s as dull as possible.

This will stop your baby from harming themselves with any random candle holders, picture frames, or remote controls left on there, and it also makes the prospect of approaching the area much less exciting.

If there’s nothing to play with, your baby won’t be interested.

Baby cages aren’t actually for your baby; they’re to keep your baby away and your TV safe.

They’re a mesh wall with a weighted bottom and can stretch out in front of the TV to keep your baby at a safe distance.

This means that they can still see the TV if it’s on from further away (as the mesh isn’t too high), but it prevents them from approaching.

You can buy similar designs for pets, which will work just as well.

A baby-proof cage can also be made relatively easily if you’re on a budget by purchasing some material, sewing in a weighted bottom along the bottom seam, and attaching it to two walls within your room to section off the TV.

You’ll easily be able to step over it if you need to, but your baby won’t.

Turn Off The TV

As we know, it’s the colors that draw them in; try to give them those sensory experiences in toy form when they’re playing with you.

Sitting in front of the TV will provide them with the images and sounds, but it doesn’t give them the smell, touch, and taste sensations they also need to learn.