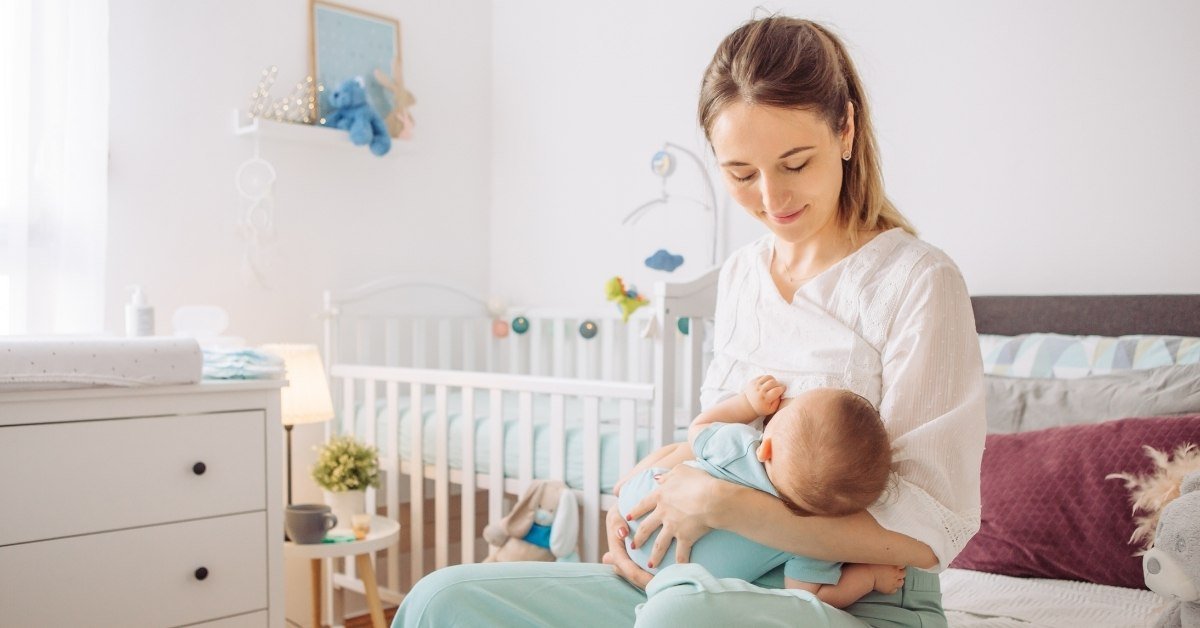 There comes a time when every breastfeeding journey needs to end – sometimes without even beginning.

This might be that time for you, but that doesn’t mean that your breasts have received the message that the “factory” is closing and milk production should halt.

Of course, it’s easy to SAY that milk should dry up. The devil is actually in the DOING. Unfortunately, lactation suppression will probably test your ability to endure pain and discomfort to the max.

It could take weeks to dry up and might lead to medical problems such as mastitis or engorgement.

The amount of time that it will take to stop milk production will vary depending on factors such as the amount of milk you’re producing, the age of your baby, or the pregnancy stage you’re at if you had not yet given birth.

For some, it takes weeks for milk production to dry up. Others dry up within days. You might notice milk stains on your bra or as you’re leaving the shower – so stock up on breast pads!

However, a word of warning: You may feel a milk let-down months or even years after your breastfeeding journey has ended!

But without any further ado: let’s explore different ways to help you in these drying times.

Contents show
1 You could always just leave it.
2 Don’t fully drain your breasts.
3 Herbal remedies.
4 Cabbage leaves.
5 Massage.
6 Stop the flow.
7 Medication.
8 Don’t stop drinking.
9 DON’T bind your breasts.
10 Wear a bra and breast pads.
11 What is mastitis?
12 What to do if you get mastitis?
13 Summary.

You could always just leave it.

If you simply stop nursing, your breast milk will eventually dry up on its own.

This was also the experience of Reddit-user, curiousdoodler. She stopped breastfeeding after a month because her milk “never came in quite right.” Once she decided to quit, she stopped pumping entirely.

She tried going cold turkey but became engorged pretty badly, so she would let the baby nurse at night – just enough to relieve the pressure.

“I had to nurse on the first night because it hurt. The second day and night, I made it through without nursing. The night I had to nurse, but again, only enough to relieve the pressure.”

After that, she was able to make it through without any help and dried up within a week. Another Reddit-user, Osteogenix, also chose this route and hand expressed in the shower when she felt overly full.

This method also worked for her. Kit-Kat1319 commented that this method was successful, but it took her two weeks to dry up, and she felt extremely engorged during this period.

As with all things in life, breastfeeding is a matter of supply and demand. That’s why milk supply increases as a baby’s needs increase.

This doesn’t mean that a bit of expression isn’t necessary. Lactation specialist Kelly Bonyata from Kellymom.com says your body needs a way to relieve the fullness.

“Pumping or hand expressing just enough milk to relieve discomfort will not prevent your milk supply from decreasing.”

Additionally, expressing a little will make it less likely that you’ll develop plugged ducts, breast infection, or an abscess.

In an era where many parents go for natural rather than medical options, it’s no wonder that herbs and herbal teas are a very popular (and effective) way to decrease milk supply.

Specifically peppermint oil. It’s suggested that the oil should be applied directly to the breasts. The cooling and tingling effects of the oil might also ease the pain of engorgement.

However, peppermint oil is harmful at high doses. So remember to dilute it in a carrier oil such as almond or jojoba oil. And never use this if you are still nursing or putting an infant on your chest for skin-to-skin contact.

Dried sage (Salvia officinalis) can be mixed into vegetable juice but won’t mix well into other juices.

You can also mix it into other foods or a broth. You can make sage tea by infusing a tablespoon of dried sage in a cup of boiling water. Steep for 5 to 15 minutes. Drink one cup 2 to 6 times per day.

Medical research conducted between 1968 and 1971 in Australia and New Zealand showed that this is an effective way to suppress lactation.

An alternative to Jasmine is parsley (Petroselinum crispum), which also lowers prolactin levels. Try it as a seasoning or eat it as part of a garden salad.

These are the best herbs for milk reduction:

The first thing that I heard about breastfeeding was that women turned cabbage leaves into bras. I was five at the time.

To this day, it’s still a tried and true remedy for weaning moms across the globe!

A cabbage leaf compress will reduce your discomfort and decrease milk supply. Now that’s an inexpensive two-for-one special that’s at least worth a try!

Cabbage leaves can also help with moderate to severe engorgement.

You can either chill the leaves or use them at room temperature. Wash the leaves and apply to breasts between feedings.

When you’re weaning, you should leave the leaves on until they wilt. Then apply new leaves as often as needed for comfort.

A gentle massage of the breasts might help you ease the pain of engorgement. It is, however, important to note that too much stimulation might increase milk production.

Therefore massages should be limited. And carefully avoid your nipple area because this will also increase production. A nice herbal massage oil could work wonders if you decide to use massage as an option.

Sage, peppermint, spearmint, lemon balm, and oregano can all be incorporated into a pressed oil (cold-pressed or hot) to make massage oils for milk suppression.

Sunflower oil might be an excellent oil to consider as it’s high in Vitamin D and is very beneficial to the skin.

Just reading about nipple stimulation can trigger a milk let-down. So maybe this is the moment to talk about it.

Most breastfeeding women have experienced this either glorious or horrifying event (it all depends on the company and timing).

The let-down reflex may happen if you see or hear your baby or even just think about them. It can also be triggered by touching your breast and nipple area.

While it’s a wonderful thing in a breastfeeding situation, it’s not something that you want to happen in the middle of a boardroom meeting!

And it’s definitely not something you would want while you’re trying to stop milk production.

The ABA suggests that you should stop the flow when necessary. You can control it by pressing firmly on your nipple with your hand or forearm for several seconds.

Various medications on the market could help with lactation suppression, but it’s always better to talk to a medical professional before using them. In fact, many of these drugs can only be prescribed by a doctor.

Drugs such as cabergoline and bromocriptine work by reducing prolactin levels.

Medicalnewstoday.com reports that these drugs work well at lowering milk supply shortly after delivery, but research has not yet assessed how well these drugs work later in lactation, such as when weaning a toddler.

In fact, research has shown that milk supply should dry up within a week, which makes birth control a good short-term strategy – even for somebody trying to get pregnant soon!

Decongestants may also eliminate breast milk supply. It is, however, important to know that decongestants do get into breast milk, so don’t use this if you are still nursing.

Reddit-user Jobie285 says she took a maximum dose of Sudafed in the morning for two days. Then she halved the dose for the next two days and then half again. She had dried up by day six.

At night she used Benadryl as this allegedly also dries up breast milk. In conjunction with this, she also went back on the Pill and took Lecithin, which helped her avoid mastitis.

Pain medication such as ibuprofen can also help during the drying up period.

Contrary to popular belief, cutting down fluids will not help reduce your milk supply. It will only lead to dehydration and won’t be in your child’s best interest. So – drink up!

Kellymom.com also recommends that you should stick to a healthy diet at this point. And hydration is a vital part of a proper diet.

One thing that could actually hinder lactation suppression and lead to complications is breast binding.

The tight binding of breasts has been practiced for centuries, but there is little to no scientific evidence to suggest that this actually works.

In fact, many health practitioners are against this practice because it can cause plugged ducts, breast infections, or breast abscesses.

A 2012 analysis of existing research also confirmed that this method increases pain rather than reducing weaning-related discomfort.

Wear a bra and breast pads.

The ABA recommends that women wear a firm bra day and night to support breasts and keep them comfortable. Take note: firm is not the same as tight.

The supportable bra should be a great fit but be roomy enough to hold whatever sort of breast pad you choose to use without putting added pressure on your breasts.

When you wear your bra to bed, ensure that it doesn’t dig into your skin when lying down. This may lead to blocked milk ducts.

Mastitis may not be a four-letter word, but it is definitely a curse for anybody who has experienced it.

Seriously. There’s nothing funny about this feverish red infection. Mastitis is a breast tissue infection that results in breast pain, swelling, warmth, and redness.

Though it’s highly unlikely that you will die from mastitis, it is possible to develop a breast abscess that will need to be drained surgically.

La Leche League International says mastitis signs include reddish patches on your breasts; hard, painful lumps in your breast; feeling achy and run down and having a low-grade fever of less than 38,4 ˚C (101 ˚F).

What to do if you get mastitis?

It’s important to rest as much as you can if you have mastitis. Apply heat prior to feedings to promote breast drainage.

Ask your doctor or nurse practitioner to use a medication such as ibuprofen to reduce inflammation.

If your breasts become redder than usual and are hot and swollen or you see blood or pus in your milk, you also need to find help.

Help is also necessary if you see red streaks on your breast from the areola to the underarm or if you have chills and continue to feel worse.

A cracked, infected nipple will also need to be monitored by a healthcare professional.

Rest is an essential component in recovery from sore breasts, plugged ducts, or breast infections. Try resting in bed with your baby cuddled next to you.

It’s important to note that mastitis might reoccur if the bacteria are resistant or not sensitive to the antibiotic you have been prescribed.

It could also reoccur when antibiotics are not continued long enough, when an incorrect antibiotic is prescribed, when the mother stops nursing on the affected side, or when the mastitis’s initial cause has not been addressed (i.e. milk is not removed from the breast).