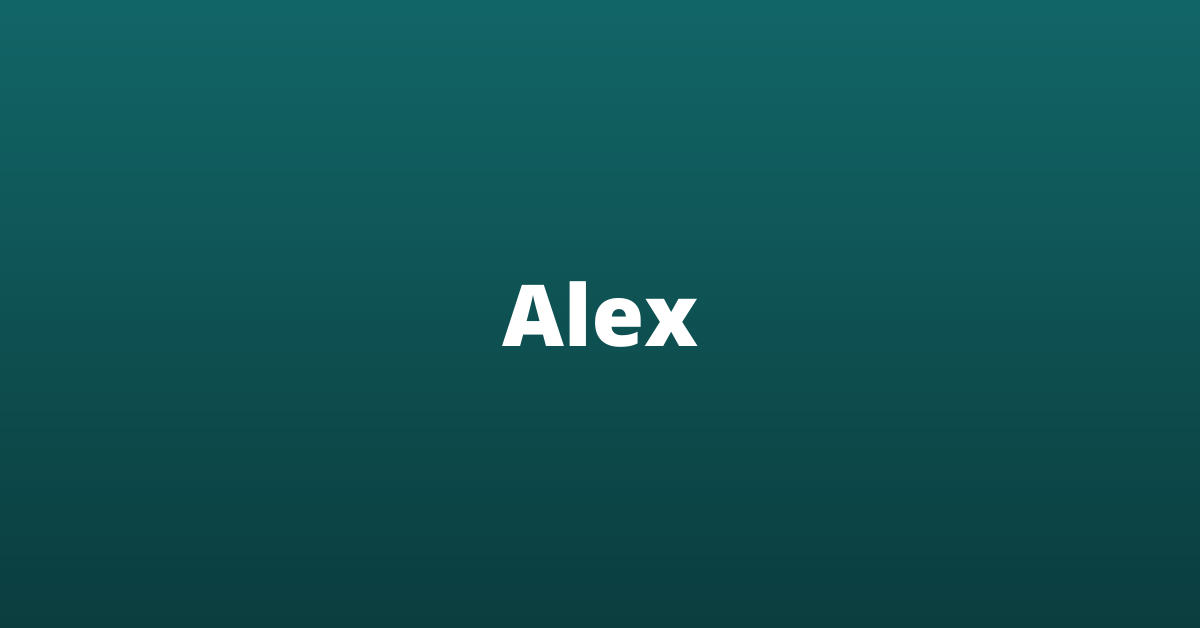 Atlas is a strong middle name for a baby who reflects the beauty of the world. The name Atlas is Greek, meaning “to carry.”

Atlas was the name of the Greek Titan who was known for carrying the world on his shoulders.

This one is for all the George Lucas fans out there. Anakin is a name of American origin meaning “warrior” and rose to popularity from the Star Wars films.

Bodi is such a unique middle name. When you pair it with a classic and timeless first name, it sounds like a new name altogether.

Bohi is Hungarian in origin, meaning “God Bless the King.” Adding an ‘h’ in the name (Bodhi) makes it slightly less religious.

Today, it’s a perfect middle name for any boy or girl with the first name Alex.

Chandler was a pretty popular name, thanks to the sitcom Friends that aired in 1994. It’s a name of French origin and means “candle maker, seller.”

Casey is a strong, Irish Gaelic name meaning “vigilant” or “watchful.” Casey is another gender-neutral middle name that is perfect for an observant little one.

This short, strong-sounding name is one of my favorites. Dean has a few origins as a name.

Some prefer the English definition that originated from a surname meaning “valley,” while others prefer the Hebrew meaning “law and justice.”

This is a classic combination of names that rolls nicely off the tongue. Daniel is a name of Hebrew origin meaning “God is my strength,” which is poetic and beautiful for the right babe.

This name sounds like the next royal Prince to me. Edward is an English name meaning “wealthy guardian.” This classic name is always in fashion.

Another classic-sounding name, this time not for a Prince, but a valiant knight. Everett is an Old English name meaning “brave, strong boar.”

Finn is a name that has gained popularity in recent years. Finn is a name with enormous energy and was one of the greatest heroes of Irish mythology.

Fionn Cuumhaill was a warrior with mystical powers and known for his generosity. Finn is an Irish name that means “fair.”

This is just the sweetest little name combination I have ever seen! Fox is an animal name initially, but the animal of the fox is highly regarded in spiritual circles.

The fox is sleek and a bit wild. A single fox is known to bring good luck.

The girls have their color names; Ruby, Rose, Violet, but this one is for the boys.

Grey/Gray can be a standalone name or short for Greyson, which has become another popular name in recent years. This name gives me soft but strong energy.

This a perfect name for a kiddo who is going to grow up mighty. Grant is an English and Gaelic name meaning “tall, big.”

It’s not just reserved for the big guys, though; it could also be referring to the size of your little one’s heart.

This name really jumps out to me because Griffin is such a fluid name. It makes a great first, middle, and last name and is as old as language itself.

Griffin is a Latin name meaning “strong lord,” which I’m sure will be accurate for the little boy that gets it.

Now, this is a great name. Hale is pronounced Hay-le and is of Old English Origin.

The name Hale means “hero; from the hall,” which I assume means from the hall of heroes in mythology. Either way, you can’t lose with this name.

This is just about of the coolest baby boy names I have stumbled across (if I do say so myself).

Hawk is an Old English name meaning “bird of prey; falcon,” which I find very appropriate. This is definitely for a rough and tumbles boy with a heart of gold.

The name Hayes is a classic for any picture-perfect boy or girl. This name is of Old English origin and means “hedged area.”

I love the name Indigo. There’s something so interesting and appealing about it.

Though it is originally a girl’s name, it has grown in popularity in a new generation of color names. The name is of Greek origin meaning “Indian dye.”

If you’re looking for a catchy, unforgettable combination, this is definitely the one for you.

The name Isacc comes from Hebrew and means “he laughs/ will laugh.” I mean, how sweet is that for a little baby boy?

Simple. Sleek. Those are the traits that come to mind when I hear this name.

Jay had Hindu influences coming from the common male name Jai which, in Sanskrit, means “victory” or “win” (just like this name is!).

This is sounding off another cool kid name alarm. The name Jett is an English name that refers to a stone or airplane.

For some reason, this name really speaks to me. I like the length and how royal it sounds.

Julian is of English and Latin origins, meaning “youthful, downy-bearded, or sky father,” all of which sound great for your little one.

Kennedy is used as both a boy and a girl name, and either way, it is a timeless classic. The name Kennedy is an Irish Gaelic name that means “helmeted chief.”

This middle name is definitely bold and different, making it really stand out. In Hawaiian culture, Kai means “sea,” and in Japanese culture, it means “forgiveness.”

Kai is also considered to have Welsh, Scandinavian, and Greek roots meaning “keeper of the keys; earth.”

I like this sweet, southern-sounding name more than I expected! Landry is of Middle English origin and means “landowner.”

Similar to the previous suggestion but, in a way, vastly different. Lane is an English name meaning “small roadway or path.”

It has grown in popularity due to country singers, and I expect that Lane will be a popular middle name choice in the next few years.

This is a great name for any boy who is ready to go the distance!

The name Myles is taken from the Latin word meaning ‘soldier” and also from the word mil, meaning “grace” or “gracious.”

Mason is a great unisex name for any parent looking to add a little length to a middle name. Mason is of English origin, meaning “one who works with stone.”

The name Neil is very old with a lot of history attached to it. Neil is of Irish origin and derived from the words “cloud,” “passionate,” or “champion.”

It was also the surname of a 4th century Irish King, Niall.

Nash is a name that has been gaining popularity over the past ten years because of how short, snappy, and cute it is!

Nash is of English origin and means “by the ash tree.”

Noah is another short, sweet name for your growing list of middles. Noah is thought to be of Hebrew origin and means “rest” and “comfort.”

Oliver is another ancient name that has been around since the beginning of language.

Oliver is derived from the Latin word meaning “olive tree planter” or could simply be an homage to baby’s olive-green room (we won’t tell!).

Owen is a fun middle name that comes from Wesh origins.

It was originally spelled Owain and pronounce OH-ween and means “young warrior” or “noble, well-born,” which is perfect for a little boy!

I heard the name Pryor for the first time in New Mexico, and it’s stuck with me ever since.

The name Pryor is of Medieval Latin origin and means “superior, first,” which is a pretty neat translation.

The name Piers is reserved for James Bond actors and cool babies, so; you’re in luck!

Piers is an old English name and surname that has the same origins as the name Peter, meaning “rock, stone.”

This stately middle name is of French and Latin origins, deriving from the name Quintinus meaning “the fifth.”

Such a fun name for your little explorer! Quest is an English name meaning “search; voyage” and is great for a baby boy with wanderlust.

If you grew up in the 90’s it’s likely this name brings back old Criminal Mind episodes for you, and for a good reason!

Reed is an interesting name of English origin, meaning “red-haired,” but it works well for any baby.

This winning name combination is perfect for the next big movie star. The name Ryan comes from the Gaelic word that means “little king”- how perfect!

This is a name for a boy who is laid back and always down for an adventure.

Slate is a name of American origin meaning “gray-green rock” and, specifically, one that splits easily into smooth, flat pieces.

This name is perfect for parents waiting to find out the gender of their baby until the very last minute! Sawyer is a name of English origin meaning “wood-worker.”

This is a name for tough little boys! Steel comes from the Old English name Steele and means “like steel,” aka tougher than nails.

The name Tucker gives me all the vibes of a southern gentleman. Tucker is of English origin and means “fabric pleater.”

Despite that, the name has spunk and comfort mixed that makes it a great choice.

Is this your 3rd child? If so, I highly recommend this name. Tripp is an American name originally meaning “the third.” See? Perfect fit!

Trying to subtly name your child after yourself or someone else can be hard to achieve unless you pull out this middle name.

Vaughn is a name of Welsh origin, meaning “small” or “junior” or “younger,” which can help solve your name conundrum!

I love this middle name because it’s long and eloquent.

This name is so spunky! Whistler is a name of English origin meaning “one who whistles,” but I like to think of it as someone super cheery!

William made it on the list because it’s classic and compliments almost every name perfectly. William is derived from Old English, meaning “hardy” or “brave” or “strong.”

An interesting name combination that will definitely leave an impression by the way it rolls easily off the tongue.

The name Xavier comes from Spanish origin and means “bright; splendid,” which is exactly what your bundle of joy promises to be.

This fun take on the classic name, Zane. Xane is a name of Hebrew origin that means “gift from God.”

If you’re not afraid of a heap of ‘x’s in a name, this is a stylish and unexpected combo.

Yarrow was a name originally intended for girls but is it’s of English origin, meaning “rough stream,” which I think is great for both a little boy or little girl!

If I could go back and re-choose my middle name, this is what I might go for.

This rock-and-roll name is a gender-neutral name of German origin, meaning “airship” for little star explorers.

I love the lavish sound that this name gives. Zachary is of Hebrew origin, meaning “God remembers,” and is derived from the names Zachariah and Zacharias.

That about does it!

It can feel like an impossible challenge to pick the perfect middle name for your baby, but I hope this list was able to give you some good suggestions to consider.