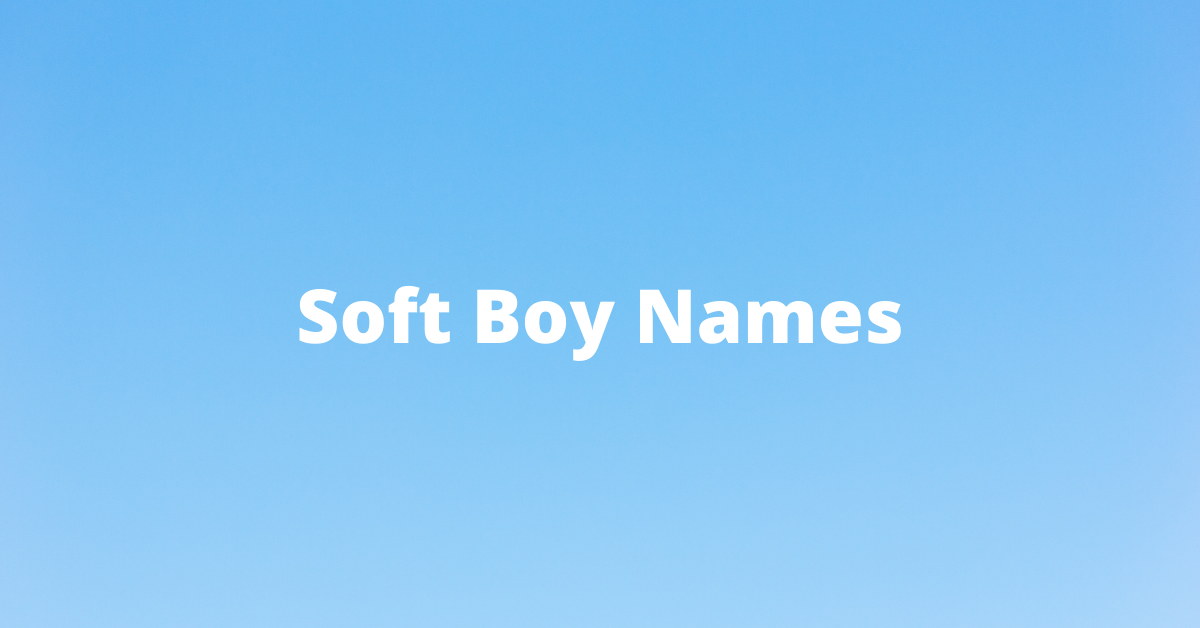 When you’re having a new baby, one of the most important things is to decide on their name.

It’s not just about getting the cutest name for a baby, but you’ve also got to consider that your baby will have that name for the rest of their lives.

So it would help if you considered a versatile, strong, but approachable name to ensure they get along well in life, no matter what the circumstances are.

What Are Soft Boy Names?

Soft boy names are names that smoothen a boy’s other names.

For example, if they have a strong middle name or surname, you’ll want to add something that makes them sound a little more approachable.

You might also want something that can be shortened to a nickname that they can carry through life and adapt to their changing personality.

There are many soft boy’s names out there that will go perfectly with stronger names to tone down any harshness and make the names roll off the tongue a little more easily.

They’re the kind of names that will make you smile just by saying them. Here are some examples of the best ones:

Jonathan has its roots based in religion. It’s the Hebrew for ‘gift from God.’ In the bible, Johnathan was one of King Saul’s sons and a good friend to David.

It can also be shortened to John if your child prefers it when they’re older.

Names beginning with ‘A’ are always soft, free-flowing names as the vowel is a more soothing sound than a consonant.

Aaron has the Hebrew meaning of ‘high mountain’ or ‘bearer of martyrs.’

It also has Scottish connotations as many Scottish children are named after the Isle of Aaron in the Highlands.

Lucas is a Greek name derived from the original Latin name Lucanus.

It’s more commonly shortened to Luke in the modern-day, but this gives your child a choice of which they’d prefer. Both names mean ‘light.’

They go well with names starting with stronger letters such as ‘R’ or ‘T.’ Miles is the British form of Milo, meaning ‘solider’ or ‘merciful one.’

The ‘L’ sound followed immediately by a vowel gives a soft opening to any name. It means ‘meadow town.’

This name reminds the speaker of a well-to-do gentleman who might be fairly softly spoken.

The sound is melodic and musical and is sure to make your little boy grow up to be intelligent and thoughtful.

Much like Aaron, the name flows well because of the beginning vowel.

It has noble connotations because of the famous legends of King Arthur and his knights of the round table and has the Celtic meaning of ‘bear.’

A gentle and quiet, yet ferocious creature.

Pascal originates from France, where it means ‘born of Passover’ in Hebrew or ‘relating to Easter’ in Latin.

It’s an original name which isn’t overused and gives the ideas of rebirth and tranquility.

In Hebrew means ‘He gave’ – ‘He’ meaning God. It’s a classical name that centers around generosity.

It can be extended to Nathaniel if you’re looking for a more formal version.

James is the English version of Jacob. Its Hebrew meaning is ‘supplanter.’

The strong letter ‘J’ coupled with the following softer ‘A’ sound makes for a name that rolls off the tongue easily.

Also spelled ‘Shawn’ or ‘Sean’ is suitable for a baby, child, or man alike, and it’s so versatile in spelling.

Its original meaning with the spelling ‘Shawn’ is ‘God is gracious.’ It is also considered worldwide as a variation of ‘John.’

A biblical name meaning ‘the Lord is my salvation’ – originally of Hebrew origin. It’s easily shortened to ‘Josh’ to suit a person of any age.

Originates from Scotland, where it’s a common surname. The meaning is ‘crooked nose’ – so not all that appealing, but it sounds lovely all the same.

Samuel also has religious connotations, meaning ‘told by God.’ The ‘S’ sound is soft and seductive, giving a calming effect.

It’s a great choice as it could easily be shortened to ‘Sammy’ or ‘Sam’ for flexibility.

Oscar is a mighty name but cute enough to suit a baby too. It has Celtic origins meaning ‘deer-lover’ or ‘champion warrior.’

Elliot is the English variation of Elijah or Elias. It loosely means ‘Jehovah is God.’ It’s a name that is soft and welcoming and suits adults and children alike.

Names beginning with ‘E’ are amazing for babies as they remind people of names derived from fairytales.

Was initially derived from the Irish surname ‘O’Reilly.’ It means ‘valiant’ or ‘courageous.’

Austin, another soft, ‘A’ name meaning ‘great’ or ‘magnificent.’

It was originally from England – the shortened form of ‘Augustine’ but brought over when America was formed.

A baby named Austin in America could just as easily be named after the place.

An English variation of Robert. The name can be changed up as your child grows, and ‘Robert’ could be adopted if they prefer.

Equally, the cute baby’s name could come from the bird – the national bird of Britain.

Is a German or Polish variation of ‘Stephen.’ The name Stefan is much more suited to a child and doesn’t have the harsh sounds mid-word.

It’s a mysterious and original name.

The name was initially intended for use with girls; however, in more recent years, it’s become unisex, meaning that your baby won’t have much competition when it comes to school.

Simply means ‘son.’ It’s a simple name which can go with any other name, and there’s no confusion over meaning.

Is a unisex name meaning ‘the long field.’ Because of the ‘Harley Davidson’ connotations, it now has a robust and masculine feeling about it.

Comes from the Latin name ‘Sebastianus’ meaning venerable. It can easily be shortened in multiple ways to match a child’s growing personality.

A popular English surname meaning ‘stoneworker.’ It most likely had French or German origins before this. It gives the feeling of a hard worker.

Easily shortened to ‘Paddy’ for a cute version. It came from the Latin word for ‘noble patrician.’ It’s now a common Irish name.

Has obvious religious meaning – a Christian being a follower of Christ. It gives a feeling of calmness and serenity.

A relatively new name for both girls and boys. It comes from Wales and means ‘ardor, passion’ or ‘enthusiasm.’ The more popularly used spelling variation is ‘Reece.’

Is the Latin or German variation of the British ‘Miles.’

It means ‘soldier’ or ‘merciful’ and gives the impression of a strong person striving to do the right thing and fighting for what they believe in.

Is also derived from the name ‘Patrick.’ It has Latin origin and is mostly used in English. The meaning of the name is debated.

It could mean ‘patrician’ or ‘nobleman.’ However, some say it means ‘peacock town’ or ‘fighting man’s estate.’

Is named by the French after the Norman town of Perci. It means ‘one who pierces the valley.’

Is a variant of ‘Pete,’ which could be used as your baby gets older. The name is English in origin and means ‘rock’.

Is the masculine version of Emma – a German name. It comes from the Hebrew for ‘universal truth.’

Has biblical meaning – ‘honoring God.’ It’s originally from Greece and can be shortened to ‘Tim’ as the baby grows.

It’s a gentle and kind name, one of the most famous Timothy’s being Tiny Tim from A Christmas Carol.

Tiny Tim is an upbeat and joyous child who works to overcome difficulties.

Another Hebrew name meaning ‘God is my judge.’ Daniel, according to the bible, was the second son of King David.

A really adorable name for a baby, stemming from the Greek word for ‘lion.’

It conjures up all kinds of lion costume images perfect for your social media photoshoots.

Another tree meaning – creating a sense of oneness with nature. The ‘rowan tree’ or ‘little redhead’ has Scottish origins.

Comes from the Latin for ‘youthful’ or ‘Jove’s child.’ It’s a common name throughout Europe, and its use is increasing yearly.

Can also be spelled ‘Aidan.’ It has Gaelic origin meaning ‘little fire.’

Is one of the few names on the list that actually has American origins. It’s a reasonably modern name meaning ‘close to God’ or ‘one who is like God.’

It’s a softened version of the name ‘Mitch,’ which could be adopted as the child ages.

The more popular variation of ‘Rhys.’ It is Welsh in origin and means ‘passion’ or ‘enthusiasm.’ It’s a name that shows that your baby is full of hope and positivity.

Has Greek origins and means ‘gift of God’. The name has a few variations to make it flexible as your child grows.

Your baby could be Theo or Teddy, depending on preference.

The name is a traditional one brought from England and can be shortened to ‘Matt’ or ‘Matty’ to add a little playfulness to such a strong name.

Meaning ‘priceless.’ Definitely something that you little boy is. The name could be shortened to ‘Tony’ or even ‘Ant’ as an adult.

The name symbolizes ‘peace’ or ‘rest,’ with the dove finding a piece of land to rest and bringing it back to the arc. It will show your child’s calm nature.

As you might have guessed – is French. It means ‘French man’ or ‘free man.’

Meaning ‘hollow valley’ – English in origin, but most popular throughout the US.

The name has Hebrew origin meaning ‘dove.’ It’s similar to ‘Noah’ in that it symbolizes peace and tranquility.

Has been a popular name in Ireland for centuries.

It means ‘youth, well-born’ or ‘young warrior,’ symbolizing the playfulness and active nature of a child’s imagination.

Popular with both boys and girls (though Ashley is the most accepted boys spelling – while girls can be spelled ‘Ashleigh’). It means ‘ash tree clearing.’

A Welsh variation of John meaning ‘the Lord is gracious.’

A modern name stemming from the English surname meaning ‘clearing’ or ‘meadow.’

Darcy is a unisex name derived from the French surname of D’Arcy. It means ‘dark-haired’ or ‘darkness.’

It was made popular by Jane Austen’s Mr. Darcy, who – not so coincidently, was known to be dark and mysterious at first.

A Hebrew name meaning ‘solid’ or ‘firm.’ It’s a name that has increased in popularity all over the world in recent years.

Is a Latin name meaning ‘servant of mars’ or ‘God of war.’ It shows the imagination and