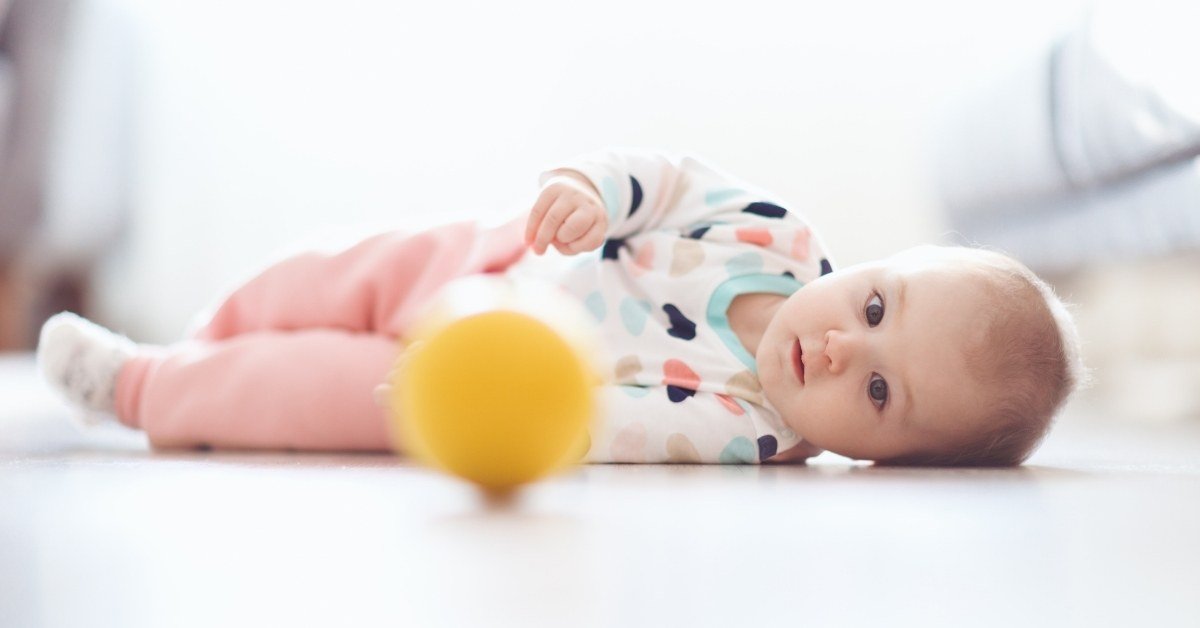 Children grow so much in their first few months Earthside. Parents eagerly start tracking milestones because they all seem to fly by in the blink of an eye.

One of the first milestones that parents start noticing is their baby rolling over.

Rolling over is one of the easiest things for babies to do because it doesn’t require the same body control that sitting up does in the head and neck.

Not to mention the proprioception that sitting up requires as an infant.

Rolling over is typically where babies start learning how to control their head and their body for later development stages that come as they age.

Contents show
1 So, When Do Babies Learn To Roll Over?
2 Struggling To Roll & What To Do About It
2.1 Tummy Time
2.2 Side-Lying
2.3 Blanket
2.4 Stop Swaddling
3 What If Your Baby Doesn’t Roll Over At All?

So, When Do Babies Learn To Roll Over?

Babies start rolling over around four months old. They will start by rocking from side to side, the motion that is foundational for rolling over.

Your baby might look a little wiggly at first without much coordination, but after the baby spends some time rocking, they will inevitably learn how to flip themselves.

Once your baby knows how to roll over, it may take a month or two of practice rolling over in one direction before they learn to roll in the other direction (tummy to back vs. back to tummy).

Once your baby has mastered rolloing, it will quickly turn into one of their favorite activities!

Make sure that he/she isn’t left high up on a changing table to the couch after they learn to roll themselves because they will want to wiggle all the time!

Struggling To Roll & What To Do About It

By the time babies are six months old, many of them have mastered the art of the roll and move on to different activities like crawling.

If you notice that your baby is struggling to roll over, there are some things to try with them to help develop their muscles and motor patterns necessary for this fundamental skill.

There is a reason doctors prescribe tummy time to parents of newborns because it works!

Tummy Time is when parents let babies lay on their bellies for short periods of time.

Starting this practice as early as possible helps the baby build strength in her back, neck, and arms that they will need to roll over.

During your next tummy time, place a toy or your face just out of reach of baby and try to encourage them to come and get it/ you.

Babies who can’t roll certainly haven’t gained the ability to crawl yet, and many babies move on the floor by rolling.

If you can entice them to try and grab you or reach for the desired toy, they might begin rocking back and forth, which will soon lead to rolling over.

Instead of placing your baby on their tummy, try placing them on their side. Take a towel or a soft blanket and roll it up so that it’s nice and long.

Place your baby on their side and put the rolled-up blanket behind their back.

Once the baby is in a comfortable position, put a book or favorite toy out a little distance away at eye level to encourage them to reach for it.

If your baby doesn’t seem interested in the book or toy, put your face where the toy was.

Smile and give them a little encouragement to see if they will reach out and start wiggling their way toward you and onto their tummy.

After your baby seems to get the hang of it, remove the towel and try to encourage them to roll over flat from their back.

Another strategy that is similar to the others. If your baby is struggling to learn how to roll over, place them on a blanket flat on their back with a favorite toy just out of reach.

Entice the baby to the toy by shaking it, jiggling it, making it light up, and play music- whatever will catch your child’s attention.

As your baby shows an interest in the toy, grab the far side of the blanket and gently lift it no more than one inch off the ground.

Getting a small “boost” from the blanket might help your baby find some rolling over success and make them more apt to continue to practice.

Once the baby has built up the right muscles and movement pattern for rolling over, let them give it a try on their own!

By the time baby is three months old, it’s time to move away from the nightly swaddle.

When babies first come home from the hospital, swaddling can be a useful tool to help relax and calm them to sleep.

However, once your baby is a bit older, a swaddle is no longer needed while they sleep and actually restricts their natural movement.

Babies experiment a lot while they sleep and in their cribs with things like rolling over, lifting their heads, and kicking their feet.

Being swaddled limits their range of motion and their ability to fully explore their movement.

What If Your Baby Doesn’t Roll Over At All?

There is a pretty wide timeline that professionals give for a baby’s first attempt at rolling over.

Some babies start the process as early as three months, while other babies are still working on the skill at six months.

Some babies skip rolling over altogether and go straight for things like sitting up and crawling.

Babies vary so differently in their development that it can be hard for parents to pinpoint where there is a problem.

Most experts agree that if the baby has learned to roll over but abruptly stops, to consult a doctor.

Additionally, if your baby is not rolling over at the 6-month mark, it is definitely important to bring it up to your pediatrician.

This becomes particularly urgent when parents aren’t noticing many attempts at other movements either.

When a baby suddenly stops performing a skill, it could be because they are learning a new skill entirely, and babies can only learn one skill at a time, so it might be nothing to worry about.

Other parents might want to be aware that if your baby is six months old and not rolling over and doesn’t seem interested in practicing any movement that it could mean that there is a developmental delay.

Getting to the root of the problem swiftly with a doctor by your side will help parents decide what the next steps would be, like physical therapy.

The sooner baby can get help, the easier their life will be, and the quicker baby will be back on the developmental track.