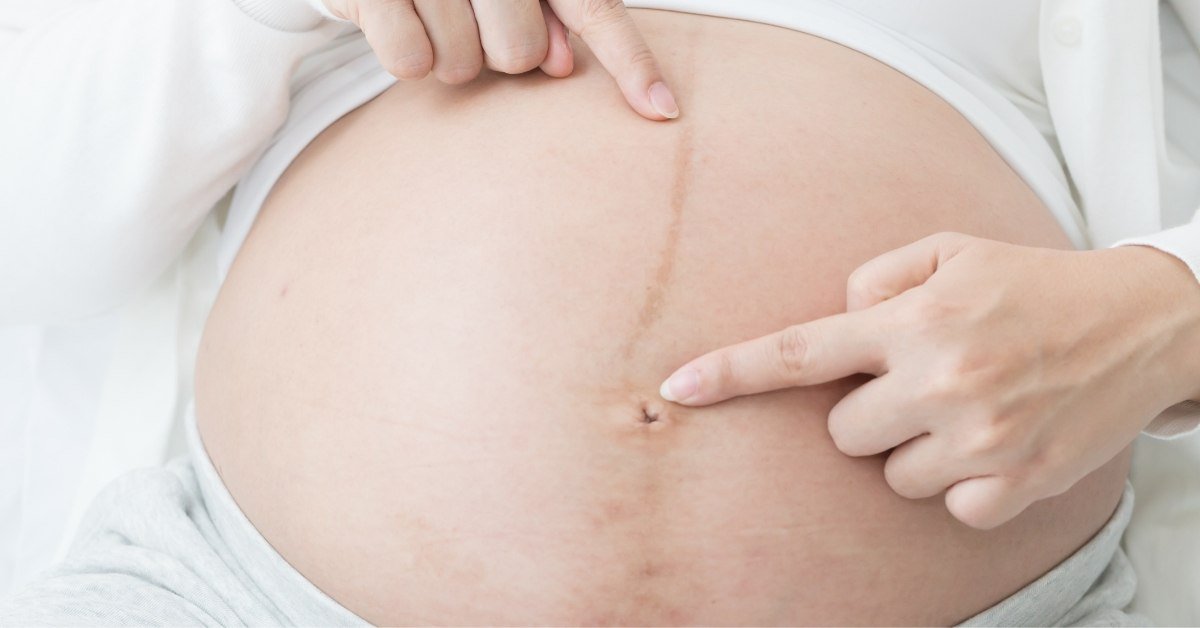 During the second trimester of pregnancy, you’ll start to see a line down the center of your belly from your belly button to your public region.

This pregnancy line is called the Linea Nigra. It is usually relatively thin, around a centimeter or less, and will gradually become darker as you get further into your pregnancy.

Contents show
1 But Why Do You Get A Line On The Belly When Pregnant?
1.1 Increased Melanin
1.2 Folic Acid Deficiency
1.3 Does Everyone Get A Pregnancy Line?
2 Pregnancy Line Above Belly Button
3 Can You Have a Line On Your Stomach And Not Be Pregnant?
4 Does The Dark Line From Pregnancy Go Away?
4.1 How To Get Rid Of The Pregnancy Line
5 Can You Prevent The Dark Pregnancy Line Before It Appears?
6 Summary

But Why Do You Get A Line On The Belly When Pregnant?

The line appears due to the increased levels of melanin that your body creates during pregnancy. This is a natural chemical reaction which increases the chemicals in your body that create color variation.

This line has always been there, so it’s not a new addition to your body, and it’s naturally darker in some women than others depending on your skin tone.

Other dark patches will start to appear on your body too, such as darker bags under the eyes, giving you a tired appearance, scars will get darker and more noticeable, and your nipples may also darken.

The easiest way to tackle this is to eat healthily by increasing the folate in your diet. Leafy greens such as spinach or kale contain lots of folates, as do fruits and whole-grain cereals.

The linea nigra is an entirely normal reaction to your body being pregnant and is nothing to worry about. It’s not harmful or concerning for your baby.

Does Everyone Get A Pregnancy Line?

Although the area of skin that would change is there for everyone, it’s not always obvious. Not all women will notice a massive difference in their skin tone, and that’s okay too.

Line or not, it doesn’t indicate that there’s any problem with the pregnancy or baby. Everyone reacts slightly differently.

The length of the line doesn’t seem to make a difference as it is simply cosmetic. There’s also no evidence to show that the longer line takes more time to fade after the birth.

However, an old wife’s tale states that if the line is past the belly button up to the ribs, you could be having a boy, whereas the shorter line, finishing at the belly button, must be a girl.

There’s no scientific evidence to back this though, but the fun superstition seems to have taken hold across the globe.

Can You Have a Line On Your Stomach And Not Be Pregnant?

Studies show that 16% of women can start to show a dark line between their belly button and pubic area when they aren’t pregnant. This most often happens between the age of 25 and 45.

Doctors don’t have a definitive reason why the linea nigra would appear outside of pregnancy; however, the most reasonable explanation would be a change in hormones – just as you would experience during pregnancy.

Does The Dark Line From Pregnancy Go Away?

Yes, it will fade when your body stops producing a high level of melanin. You’ll start to see the line gradually fading a few weeks after you’ve given birth, though it may take months to disappear entirely.

Each time you get pregnant, the line will reappear again.

Some women never fully get rid of their linea nigra after pregnancy and, although it will always fade, it remains darker than the skin around it. This can happen if you have particularly pale skin.

How To Get Rid Of The Pregnancy Line

If your linea nigra doesn’t fade after pregnancy and you’re paranoid about the appearance, you could try bleaching the skin.

Skin bleach can be obtained from a dermatologist, and it’s always recommended to do a patch test first as there are some strong chemicals in there.

Although bleaching the skin can work fine for some people, there have been a few concerns raised regarding its use:

A simple solution while you’re waiting for your line to fade is covering it with makeup and ensuring you always use sunscreen, as this will prevent the line from becoming darker.

Can You Prevent The Dark Pregnancy Line Before It Appears?

Because the linea nigra is an entirely natural and normal aspect of pregnancy, there’s no need to try to prevent it.

However, if you’re anxious about the appearance, you can minimize the pigmentation change by avoiding the sun as much as possible (not just on your belly).

Believe it or not, getting a tan on other areas of your body can stimulate melanin production for areas that aren’t exposed too.

So getting tanned legs could affect your belly, even if you don’t realize it.

You should completely avoid sunbeds or other fake tan techniques too. Not only can these increase the appearance of the dark line, but they’re also bad for your baby.

The dark line which appears during pregnancy is not harmful to your body and will normally fade over time, so there’s no need to do anything.

In fact, everyone has a linea nigra, it simply gets darker at times of heightened emotion or during a drastic hormone change. If the line bothers you, try to cover it up cosmetically with makeup until it fades away.